Challenge Rural India lives in villages that are far flung and remote. Reaching these villages is not easy given the poor state of roads, power problems, low per capita disposable incomes that is half the urban disposable income, seasonal consumption linked to harvests and festivals; and inaccessibility to conventional advertising media. No active marketing or distribution exists to service the roughly 3.6 million rural retail points in these villages because of uneconomical ‘last mile’ logistics. These villages as economic units are too feeble to support the scale of investment required to upgrade last mile connectivity. Intermediaries are present at the district and block level. They make the supply chain inefficient, increase costs and add no value Drishtee faces a challenge to provide products and services in time and cost effectively to kiosks that are geographically scattered and remote. Distribution costs of servicing such dispersed kiosks become prohibitive and the irregular servicing results in kiosk dissatisfaction.

Opportunity Rural India comprises of 610,000 villages that are spread over 3.2 million sq km. The 700 million Indians living in these villages constitute a large consuming class with 41 per cent of India’s middle-class and 58 per cent of the total disposable income. These 128 million households provide a huge opportunity for goods and services that today are not available due to absent last mile connectivity.

Opportunity Huge market in rural India – US$ 53 Billion for establishment of last mile distribution networks to create access to goods and services in rural India. Two major policy initiatives by the Indian Government: Increased outlay for rural development; and the National Rural Employment Guarantee Scheme (NREGS) facilitating larger flow of money into ruralIndia. Increasing trend in establishment of village-based micro-enterprises, which will further help crank-up village economy and also help capital formation in village and provide Drishtee with an alternate sourcing avenue as against urban manufactures.

Value Proposition First mover advantage with expertise in rolling out a unique last mile distribution network, built on both Information and Communication Technology (ICT) application and “ground level entrepreneurship” (village based retailers as well as village based micro-enterprises). Unique distribution model that connects to both the urban manufacturer as well as village-based micro-enterprises, which lends itself to Drishtee being in a strong bargaining position with both, also thereby continually pushing both (to a large extent urban manufacturer and to a lesser extent village-based micro-enterprise) to improve their service terms to Drishtee as Drishteeâ’s operation scales up apart from it being just the scaling-up impact. Ability to develop products and services specifically designed to cater to the rural markets. Generating employment opportunities for rural entrepreneurs, with equal gender focus.

Current & Future Network Existing network of over 3,000 RRPs (Rural Retail Points) across 3 states in India. Ambitious target of reaching out to 100,000 villages in India over the next 10 years. Over a longer period, Drishtee aims to be the largest organized rural distribution network across the globe with access to the last mile in majority of rural clusters.

Market Size India has a total of 610 districts. Assuming ten blocks per district, there are 6100 blocks in the country. Drishtee plans to carve out 12 routes in each block covering 20 villages each. This way we can access all 610,000 villages. To start with, Drishtee plans to initiate SCM operations in ten clusters called Territories comprising of 20 blocks each. Each territory has 2000 villages.

Pilot With its expanding network of franchisee kiosks, in July-August 2007 Drishtee decided to assess the possibility of increasing the volume of transaction by carrying pre ordered FMCG and durable products to existing rural retail points (RRPs) on the same route where it already had kiosks. To test the viability of the rural distribution business model a pilot was carried out in Mathura district of western Uttar Pradesh in August 2007. For more focused results, the pilot was limited to the distribution of FMCG products and alliances were made with local distributors of both national and regional brands. The progress till 2012 is as follows 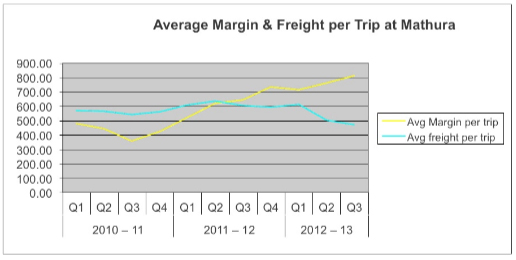 Drishtee aims to create a snowballing effect in the rural market by strengthening and expanding the supply chain network that it has built, which has the capacity to service many local entrepreneurs as against owning these retail points directly. By lowering its margin expectation, Drishtee’s unique supply chain network reduces the need for a higher capital investment, and lowers the overall risk by sharing it with a large base of rural entrepreneurs (village based retailers as well as village based micro-enterprises). In addition, Drishtee’s emphasis on establishing a delivery network (not just for urban manufacturers who wish to push into rural areas as well as for village-based micro-enterprises) strengthens its first mover advantage and creates a significant entry barrier for organized retail. Since, the same network shall procure from village-based micro-enterprises, it shall enhance their sustainability as well as positively impact Drishtee’s net margins as well as bargaining ability with urban manufacturers of similar product categories. Its model of working with local entrepreneurs (both the village-based small retailer as well as village-based micro-enterprise) is socially and politically sensitive of the rural environment as it distributes wealth across the spectrum rather than concentrating it in the hands of a few companies as in the case of organized retail and procurement only from urban producers. This would be Drishtee’s key differentiator in the space for years to come.